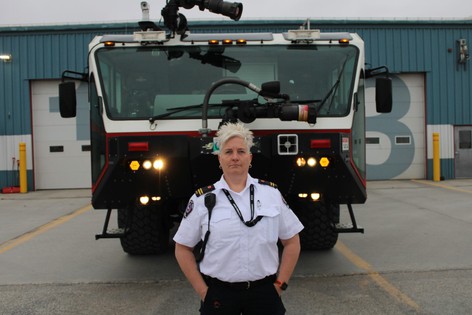 Leah Kosolofski’s journey through occupation-related cancer began last year when she developed lower abdominal discomfort followed by the discovery of blood in her urine.
After undergoing tests with no definitive diagnosis, the 28-year firefighting veteran visited a urologist and was diagnosed with bladder cancer. The tumour was removed and she began her recovery, which included battling depression and educating health-care providers about cancer-related to firefighting.
“My GP said, ‘You are a healthy individual. You’re 46 years old. I would never have thought to look for bladder cancer in somebody your age, and your health,’” she said. “He said it’s more common in 70 to 80-year-olds.”

In the months after her surgery, Kosolofski, who is now cancer-free, took note of the number of female firefighters battling cancer, particularly those who’ve worked in the profession for 20 or 30 years.

As a growing number of Kosolofski’s male colleagues became ill, the subject came out of the shadows. Cancer education arrived slowly in fire departments. Members learned about myriad carcinogens associated with battling fires such as benzene, asbestos, formaldehyde, diesel exhaust and perfluorooctane acid, an ingredient in firefighting foam.

The Firefighter Cancer Support Network says cancer is the most dangerous threat to firefighter health and safety. Data from the International Association of Firefighters (IAFF) says cancer caused 66% of firefighter line-of-duty fatalities from 2002 to 2019.

To help address the problem of contaminant exposure, many fire departments now use a clean cab concept. Carcinogen-covered fire gear isn’t allowed in vehicles after a fire. Jackets and pants are bagged, sealed, and immediately placed into industrial washing machines. “Deconning” may also mean the on-site washing of gear. Fire wipes are used to clean skin of contaminants after fires. Concerningly, recent studies have shown that even the bunker gear firefighters wear, which has been coated with fluorinated compounds to make them water-resistant, is a potential cause of cancer.

Dr. Kenneth Kunz, a medical oncologist specializing in firefighter cancer research and education, says women make up less than 5% of all Canadian firefighters and they are widely scattered throughout major metropolitan fire departments and small rural volunteer fire halls across Canada. He said cancer rates in female firefighters run much higher than the general population where approximately 45% of Canadian women get cancer and around 30% eventually succumb to it.
“But now, if the woman becomes a firefighter, because of the miasma of carcinogenic compounds that she encounters when fighting a fire, in addition to the physiological strain caused by disturbances in sleep-wake cycles, and the emotional stress of the job, all of which suppress the immune system, female firefighters get at minimum 20% more cancers than the general population,” he said. “That means around 65% of female firefighters will eventually get cancer, and 45% of female firefighters will die of cancer, in some cases long after they have retired from the fire service.”
Kunz said the global scarcity of female firefighters is the main reason why there’s been little scientific research into the problem of female firefighter cancers. There’s been a lack of attention in media for the same reason, he explained, adding there’ve been a few scientific publications with very small numbers of women, and some magazine articles on cancer in female firefighters, but they are few and far between.

“This topic has never been thoroughly studied scientifically, because, as a population, female firefighters are relatively rare, and thus hard to find,” he said.

“I have spoken with some female firefighters in the United States where they have been diagnosed with cancer and end up tens of thousands of dollars in debt, with some even losing their homes as a result of the costs of treatment,” he said.

Kosolofski said Manitoba WCB recognized her cancer as work-related, adding the province has ratified presumptive cancer legislation for female firefighters. She said breast cancer was recently added to the legislation.

“But with bladder cancer, you must have a minimum of 15 years firefighting service in order to qualify for help,” she said. “They conduct an investigation on their end, and basically gather your entire career history and make a ruling. So my big push is, if our male counterparts are covered for testicular and other cancers, why isn’t ovarian and cervical cancer covered? So here in Manitoba, those two types of cancers are not approved.”

Concerning the minimum exposure periods required by WCB, Kunz said, “According to the best dictates of my knowledge and experience as an oncologist, I have never known any type of cancer to obey a minimum cumulative exposure period. Cancers come when they want to, and many firefighters have gone to their deaths without WCB support on account of these fabricated numbers, which seem to have been plucked out of the air.”
Alex Forrest, president of the United Fire Fighters of Winnipeg, has been tackling the problem of firefighter cancer for 25 years. He’s worked with government on presumptive cancer legislation. Like Kunz, he said it’s difficult to study female firefighters because of scarcity, adding women firefighters need the same cancer support as men.
“The science may not be able to have the same level of proof, not because there isn’t a connection between women firefighters and cancer, but because we do not have the numbers,” he said. “Women firefighters should not be penalized for this. If you were to prioritize cancer in female firefighters the same as men, you’d have more women applying to be firefighters. Still, Canada is a leader in recognizing occupational cancer in firefighters.”Despite the risks, Kosolofski said firefighting is the best job in the world. She wants more women recruited into fire departments. Building on her experience, she’s now working with other firefighters experiencing work-related cancer through the Firefighter Cancer Support Network.

“That’s really helped me process my cancer,” she said. “I want to let people know there is support out there.”