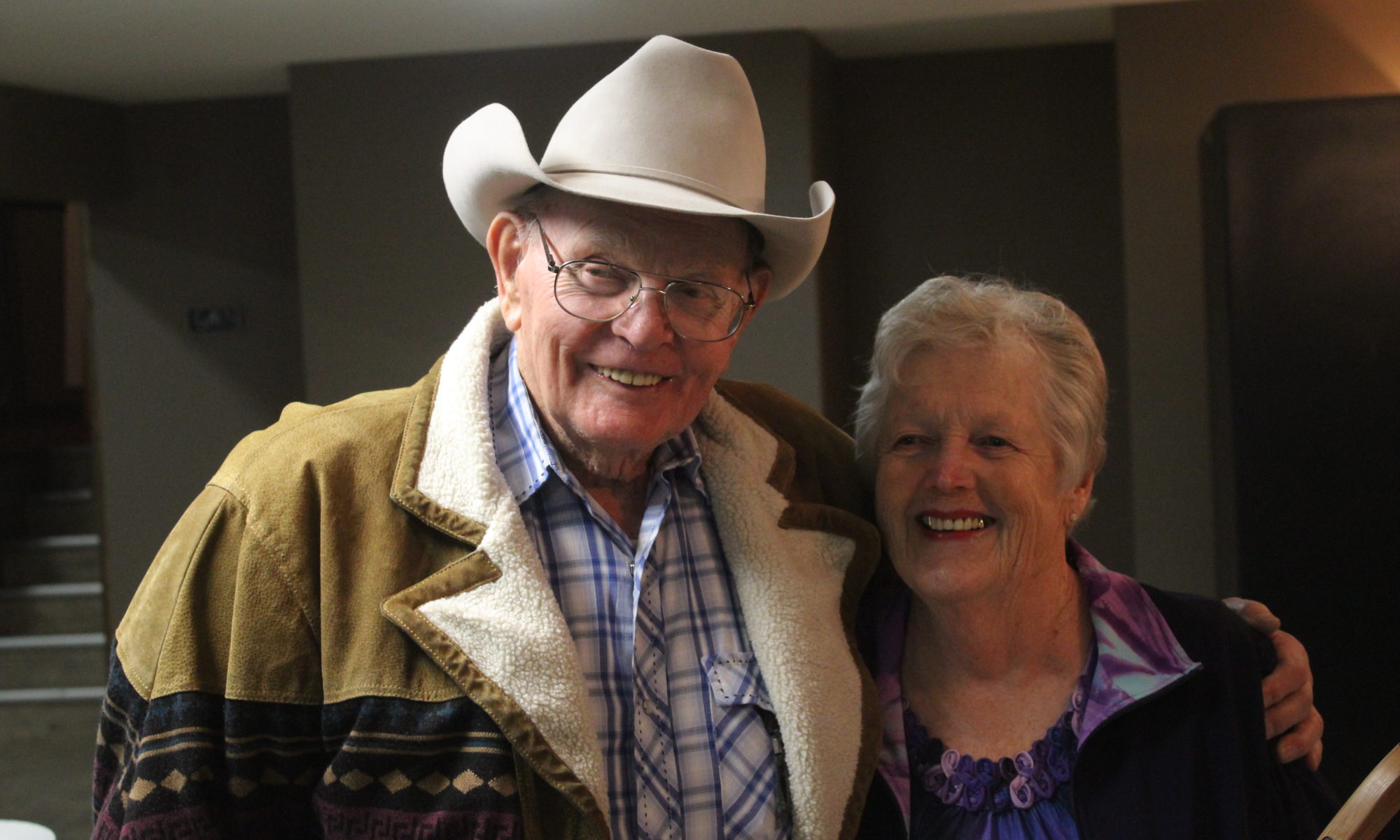 Cattle ranching is a critical industry that binds together all chapters of the great Canadian agriculture story. The Waldo Stockbreeders Association in Jaffray B.C., which celebrated its 80th anniversary on Saturday, is part of the glue that holds the book together. The event took place in the Jaffray Community Centre on Saturday evening. Compared to Fernie, with its thriving nightlife and modern art scene, the ranching culture around Jaffray, with its large open fields juxtaposed to serrated peaks, is like visiting another country where cows still roam the range, men in cowboy hats fix fences, and children work in kitchens.

On Saturday night it was all about celebration, storytelling, and roast beef with all the trimmings. Andy McDonald, 89, has seen a lot of changes in the Kootenay cattle business over the decades.

“There’s a lot more government involvement,” he explained, “You have to have them all tagged and you have to do this [and that]. There was none of that years ago. The only thing you had to do was brand them. There’s definitely more paperwork.”

McDonald said the Waldo Stockbreeders parent organization is the BC Cattleman’s Association.

“When I started, you had to have a thousand head in the area to have a director with the BC Cattleman,” he said. “To have a second you needed 10,000. And we were pretty close to that before the Libby Dam came in. Since then, I don’t know how many years, there’s a lot of people who got out of [ranching].”

The reason for slow decline in the number of cattle ranches is “too much work,’ explained McDonald. “Not really work, but the government is in your pocket more than they used to be.”

McDonald said that another part of the equation is fewer young people staying in the business.

“On our ranch, there’s nobody to [take over],” he said. “When we are done, none of our grandkids are interested in the ranch. They can go get a job working for a lot more money than you’d ever get out of ranching. They might do it as a hobby or a sideline. To make a go of it is pretty hard.”

Tyler Morrison, President of the Waldo Stockbreeders Association, and third generation rancher, is bucking the trend. He returned to the Kootenays with his wife to take over the family farm after working as an agricultural supervisor with Safeway Canada.

“My dad was getting to the age where we had to come back or sell the farm,” he explained. “I made the choice willingly. My wife and I both had good jobs in Alberta. We decided this is where we want to raise our kids, and the farm life is how we like to do it.”

“[But] I think our future is bright,” he said. “Where we struggle is getting our message out. There’s a lot of misinformation out there. People are getting more and more removed. I was just at a course, and 98 per cent of the B.C. population is removed from agriculture. They live in urban settings.

There is an opportunity, said Morrison, to get the truth out.

“Our message is, we are treating things properly, and our food is safe. Coming from my background in the food industry, now I’m in the beef industry, the Canadian food industry is the safest place to eat. B.C. is seeing more small, local producers said Morrison.

“People like to know where their food comes from,” he said. “In our larger organization, it’s our job to promote ourselves as small and local.”

Dorothy Durham, a multi-decade, active member of the Waldo Stockbreeders Association said the company was formed to better organize the range, and to solve the wild horse problem that developed in the 1930s.

“They organized, and it’s been going strong ever since,” she said. “After the Libby Dam, there was a lot of range lost.

Ranchers vacated the area, then there was more pressure from recreation and wildlife. That, and the fluctuating market for beef, caused a lot of ranchers to go out of production.”

Durham says area cattle ranchers are worse off than in 1939.

“But those that are here are doing well and staying strong,” she explained. “I would say our cattle probably dropped by more than half in the area. At least. Probably more.”

“Because of the increase in the elk population, for one, and some deer populations, there’s pressure on the range, so therefore the managers of the range, who are the Forest Service, put more pressure on the ranchers. Range has been lost and not reallocated. And therefore it’s getting tougher all the time. Ranchers have to have a range plan, and they’re not really bookkeepers.”

Durham said the Waldo Stockbreeders Association is the longest ongoing cattle association in the province.

“We been a society since 1939,” she explained. “We still meet on a fairly regular basis to deal with the impact of tourism, things like mud bogging, and quads on the range cutting fences and chasing cattle. We also meet regularly to discuss problems with noxious weeds, which we are concerned about. They come in on tires and train tracks.

“And of course they do that by various means,” she said. “Some have run mills or worked in the logging industry. It is a lot of work, but the returns are not that great unless you are big enough to sustain it.”

Some people stay in the business because they love the quality of life explained Durham.

“There’s a lot of pleasure in getting off your crops and seeing your cattle thrive,” she said. “But some of the problems we had in the forties we still have today.”

Sara Amos, a member of the local 4-H group who does sewing, food and heifers thinks the stockbreeders association is “pretty great.”

“Because there are so many people involved in ranching, and that is how we get fed.”

“Ranching means a lot to me, because where we are living right now is a big farm, and we’re going to have a lot of animals on it. It teaches little ones like my brother to farm, because when they are older, they’re going to have farms. If people don’t have farms they can’t raise animals to get meat and food.” 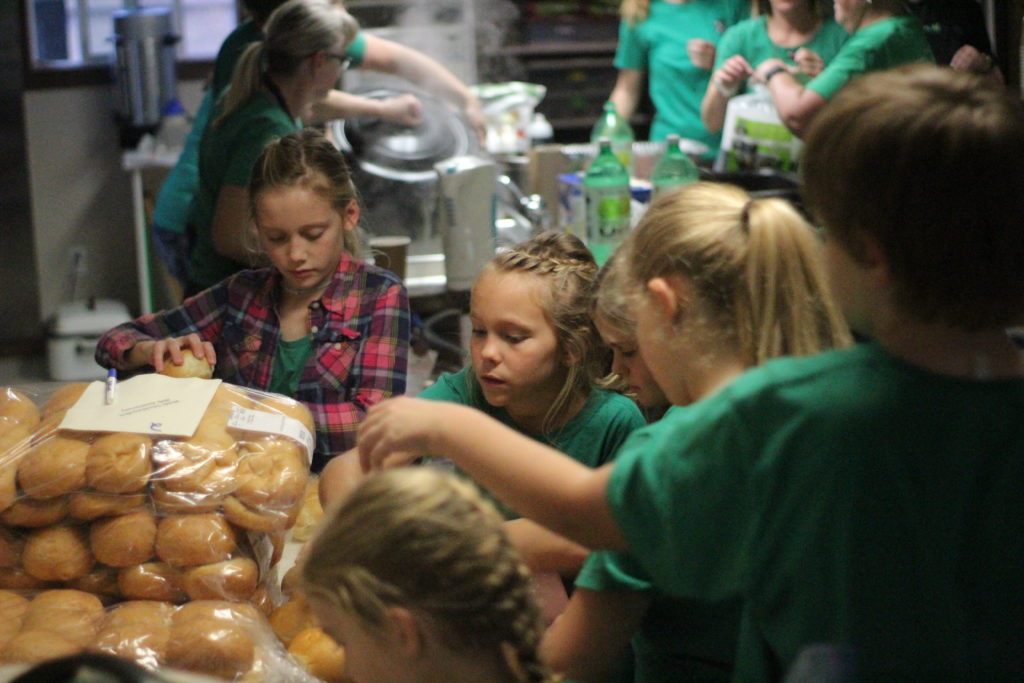 The feeling of driving away from the Waldo Stockbreeders 80th anniversary celebration in the snow is best communicated through the poetry of famed Canadian singer Ian Tyson.

“So you thought they’re all gone. There’s still one a-hangin’ on. Tied hard and fast to the memories. Might near the only one, could tell us how she got done, whilst’ a chasing the wild bovine. There’s ten million cattle, on ten thousand hills. Guess no man can ride for ‘em all.”