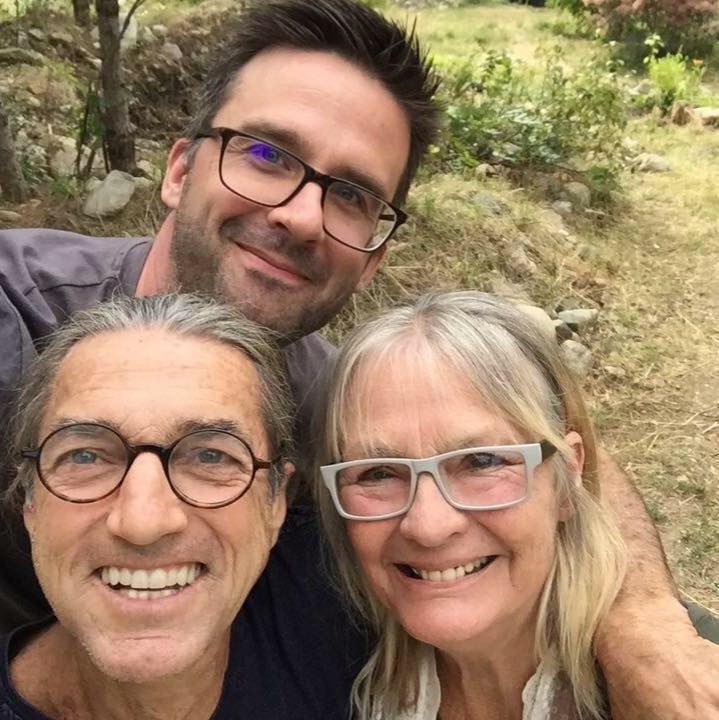 How I came to live with Hillary Clinton’s private yoga instructor, Nateshvar, started with a gunshot. My father. He walked into the bedroom that he shared with his two children and wife in East Vancouver, retrieved his prized hunting rifle from under the bed, and ended his decades long battle with mental illness.

I wasn’t surprised when I got the call from my stepmother. In a way, I felt relieved for the whole family, who’d been living under the dark cloud of my father’s paranoid schizophrenia since the late 70s. My brother Daniel and I repainted the bedroom and filled the bullet hole in the ceiling.

In the weeks after the funeral, I dumped or gave away most of my possessions in Calgary. Back in B.C., my mother, who divorced my dad back in the 80s, went into a tailspin. She moved into the house of a hermit psychologist named Fern Cooper in the village Slocan south of Nakusp, B.C. It was there, during a Bible study, that she fell in love with Ken Scott.

Ken lived in a tiny off-grid cabin outside of town. He hitchhiked into Slocan to play the piano and eat with my mom and Fern. A couple months later, my mom moved in with Ken. With nowhere to go and suffering from depression, I followed. Upon arrival, I learned that my mom was sleeping in Demi Moore’s housecoat, albeit mouse chewed and dirty. There was a picture of Ken and his close friend Woody Harrelson pinned on the wall next to volumes of new age and occult literature. Ken Scott and Nateshvar, it turned out, were the same person.

And so, my recovery from suicide began – without the aid running water, electricity, or a phone. I started eating good food, playing the guitar with Ken, chopping firewood, and falling asleep to the sound of Enterprise Creek, which ran a few meters from the cabin. We had a tiny wood stove that produced insufficient heat. Near the stove was an arrangement of marijuana seedlings.

One night, as the moon the beamed into the cabin, Ken smoked a reefer and told the story of getting disavowed by Hillary Clinton and The White House after a day of alleged kundalini yoga with the First Lady. He also spoke of his time with musician Peter Gabriel, and Peter’s dad Ralph, with whom Peter had a distant relationship.

A few years prior, Ken had invented contact yoga, which was heavily promoted in Hollywood by Tara Guber, wife of Mandalay Entertainment’s Peter Guber. Gabriel flew Ken to his recording studio in the U.K. From there, they headed to the English countryside for several days of contact Yoga. The result was a renewed relationship between the rock star and his father. In memory of the getaway, Gabriel wrote the song Father-Son.

“Father, son, locked as one, in this empty room. Spine against spine, yours against mine, till the warmth comes through. Remember the breakwaters down by the waves. I first found my courage, knowing daddy could save. I could hold back the tide, with my dad by my side.

Dogs, plows and bows, we move through each pose, struggling in our separate ways. Mantras and hymns, unfolding limbs, looking for release through the pain. And the yogi’s eyes are open, looking up above. He too is dreaming of his daddy’s love. With his dad by his side. Got his dad by his side.”

Looking back on those strange and happy days in the Slocan Valley, I feel that in some way I’m one of the distant intended recipients of that song, like picking up a message in a bottle thirty years after its release.

There is no clear path to healing after suicide and trauma. Fighting through the emotional underbrush is tiring and painful. But there’s hope if you don’t give up. You can make your way into the peaceful mountains of life with the help of a friend.