Teck Resources Ltd. has four operating steelmaking coal mines in the Fernie area, producing approximately 26 million tonnes of steelmaking coal a year. Most of the product is shipped to the Asia-Pacific region via ports on the West Coast.

Standing on the edge of the Natal West pit is like staring into an abyss of other-world-like technical amazement. The hole is 1.5 kilometres across and 500 metres deep. A three-story drill, which looks the size of an insect from above, works at the bottom of the pit, drilling 12-inch diameter holes that’ll be packed with nitrate-based explosives. In a few hours, technicians will blast a large slab of sedimentary rock. Roughly ninety per cent of the rubble will be hauled away as backfill. The rest is varying grades of steelmaking coal.

The coal is scooped into massive dump trucks, conveyed to the valley bottom, cleaned, stored in silos, and loaded onto trains. It takes a small army to keep the mines safe and productive. Teck employs 4000 Elk Valley residents. The company infuses millions of dollars a year into local, provincial and federal economies.

These days, Teck is doing much more than extracting coal and maintaining safety. They’re also moving mountains for the environment. As technology advances, so does Teck’s ability to detect and manage the unwanted substances associated with coal mining. Two in particular are of significant concern to local waterways. The first is selenium, an element that’s critical for animal life in tiny concentrations, but harmful at higher concentrations. The other is nitrate, which comes from mine explosives.

Selenium is concentrated mainly through snowmelt, as water passes through waste rock piles. It can take approximately eight years for water to migrate from the top of Teck’s rock piles to the bottom. The mine influenced water then makes its way into area rivers. It can effect aquatic invertebrates, trout, and subsequently the watershed’s ecosystem.

In 2018, The Free Press reported that Teck issued a public notice advising surface and shallow groundwater users along the Fording and Elk rivers that concentrations of some mine-related constituents may be elevated. Initial results showed six of the 92 wells sampled between 2014-17 “slightly exceeded” the provincial water guideline for selenium.

Thomas Davidson, Superintendent – Water Operations, is one of Teck’s foot soldiers in the battle against selenium and nitrate. It’s a battle he and the company are winning. Davidson and his colleagues are responsible for the construction and operation of Teck’s$170 million, tank-based, water treatment plant, which is located adjacent to West Line Creek. The facility harnesses biological processes to purify the creek. It also serves as an ongoing research base to expand the technology to other areas and mine sites.

The treatment process converts nitrate into harmless nitrogen gas, and transforms selenium into a solid, disposable form. “Approximately 1.8 kilograms of selenium per day,” Davidson explains. “We process around 6000 cubic meters of water a day, which can contain up to 250 parts per billion selenium. The outflow is less than 15 parts per billion.”

“[But] Our monitoring program is really robust,” he says. “We have a lot of data.”

The 20 month old SRF project also uses naturally occurring biological processes to remove selenium and nitrate from the water-saturated backfilled pit. The in situ method does not require an extensive industrial facility. Rather, a series of high volume injection and extraction wells are used in the purification process. Mine influenced water is injected into the waste rock pile. Clean water is extracted and discharged. SRF is less energy intensive and lower cost.

Dean Runzer, General Manager – Water Quality at Teck said the SRF site pumps in 10,000 cubic metres of water per day, and pumps out the same volume of treated water.

Davidson said the only problem with the SRF pilot project is that it works too well.

“The reaction is much faster and much better than we thought,” he said. “It’s really awesome.”

Runzer said there is no residual waste using SRF. “It stays in the ground,” he said. “And there’s great potential to even triple the capacity [of the SRF technology].”

Nic Milligan, Manager of Social Responsibility with Teck said the company is entering the second phase of the SRF pilot project.

“As we move from 10,000 cubic meters a day, to 20,000, we are proving it up as a viable technology for replacement of active water treatment,” he explained. “It’s less energy intensive, quicker to build, easier to operate, and there’s less management intervention. And as you’ve seen, we are pretty good at digging big holes and filling them in again.”

Milligan added, “We see Saturated Rock Fill as the future of water treatment technology in the region.” 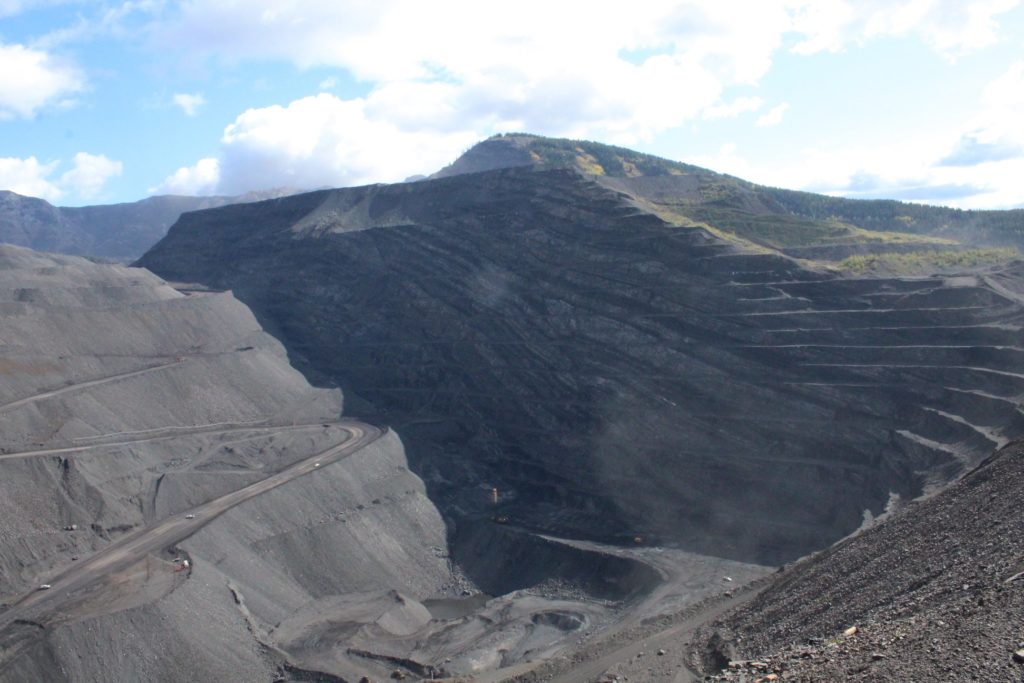