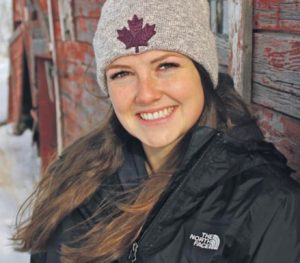 Change is constant on the Prairies, starting with new life and then shifting to growth, development, maturation and eventually renewal.

TeddiAnn Skibsted is on the cusp of one such change as one of Canada’s youngest up-and-coming farm bosses.

TeddiAnn’s mother, Sherri, presides over the activities this day. She’s sitting at the kitchen table making Christmas ornaments with her daughters. A reverse osmosis water dispenser gurgles by the kitchen sink.

“We want grandchildren, so our girls must have good water,” says Sherri.

TeddiAnn and her younger sister, EricaLynn, chuckle. A few moments later, with phone in hand, TeddiAnn looks up and smiles.

“The best part of living on the farm is freedom. The hardest part is working with family and the crew. But there’s a reward knowing you’ve done your part,” says the 19-year-old agriculture management diploma holder and degree student.

A small dog under the table whines for attention. TeddiAnn lifts the animal into her lap.

“I have big shoes to fill because my dad makes farming look so easy,” she says. “But he’s helping me as I go. Everything I know is because of him. When school is done, I’ll be here full-time.”

TeddiAnn says she loves working under her father’s mentorship, but she’s planning for change.

“I can help my dad understand all the new automation. There’s a lot of it,” she says.
“Technology allows for strategic application of fertilizer. I also want to diversify, which means exploring new markets and better crop rotations. We need to try different crops, but Dad wants me to shoul- der that stress.”

Sherri adds: “We had someone here the other day trying to sell us the GIS equipment, but we want to wait until TeddiAnn has finished her degree before we proceed.”

Human resource skills are important to TeddiAnn. She says keeping employees and family members productive and happy is key to success.

“You have to know the best way to handle everyone and their prob- lems. When you have big problems, everything falls apart. The whole farm can be compromised by bad attitudes.”

TeddiAnn says taking on the role of a young leader can be intimidating, but she’s willing to tackle the challenge to see the farm carry on for future generations.
“No matter what, I’ll try to make it as successful as I can. The happiest times for me are here when the crops are off and harvest is over. I love the smell of seeding and harvest.”

Being a woman in agriculture has been good for TeddiAnn. She says attitudes toward female farmers have changed.

“There are so many girls that have been successful in taking over family farms. It used to be more of a man’s world, but there are so many new roles for women,” she says.

Sherri points out that technology today is making it easier for women to manage the physical labour.

“It doesn’t matter if you’re a woman or a man; if something breaks, you have to call a technician. But there are some things we can’t do.”

Adds TeddiAnn: “The weather doesn’t care about gender, either.”

Sherri says her daughter has a special talent for people management.

“She has the ability to motivate people, like her father. Eighty per- cent of our work isn’t fun, so that matters. She’s also getting better at asking for help.